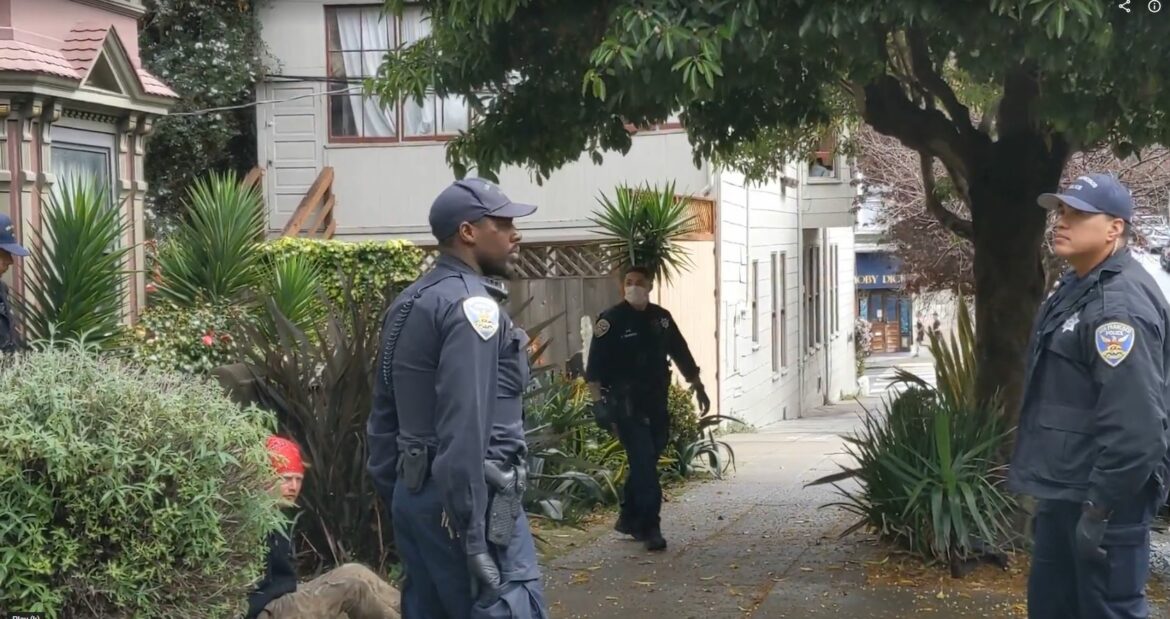 Police are often the first to respond when neighbors register complaints about apparently homeless people. Last March officers were first to the scene of a complaint about a man in the Castro.

In an attempt to limit police involvement with emergency calls about homelessness, a city group is proposing eliminating a multimillion-dollar program launched in 2018.

The group, composed of representatives of about two dozen city agencies and nonprofits, released a 74-page paper Tuesday outlining its plan, called the Compassionate Alternative Response Team. The project comes in response to a resolution the San Francisco Police Commission passed a year ago seeking to eradicate a police-first response to 911 calls surrounding homelessness.

Supervisor Matt Haney, whose office was part of the working group, said the role of the program up for elimination, the Healthy Streets Operation Center, which at one point had 52 police officers on board, “needs to change dramatically.”

The center “has too often been the vehicle for facilitating a police-led response to homelessness,” he said. “That approach isn’t working for anyone, and is ineffective, costly and often harmful.”

Opponents of a police-led response to homelessness argue that officers are not equipped to handle complicated mental health issues or trained to connect people to the city’s myriad social services. In the past, police responses to calls about homelessness have resulted in fatal shootings, like that of Luis Gongora Pat in the Mission in 2016.

The working group instead proposed creating an emergency response dispatch team to receive calls routed through 911 and a direct hotline. This team would assess the urgency of the calls and dispatch a team, which could include social, mental health and medical workers, depending on the issue. The Compassionate Alternative Response Team would build on the city’s growing Street Crisis Response Team which launched last year, handling overflow calls once the street crisis team’s capacity is exhausted.

The Compassionate Alternative Response Team is similar in design to several other policing alternative efforts across the country, including Mental Health First in Oakland, but it’s most closely related to a program established in the 1980s in Eugene, Ore. Eugene’s program was created by grassroots organizers and has grown to closely collaborate with the city’s emergency dispatch program, responding to 24,000 of the city’s emergency 911 calls in 2019.

As a byproduct of the team’s creation, organizers said the Healthy Streets Operation Center, which was founded in 2018 to respond to complaints about encampments, would be made irrelevant. The center deploys staff from the Department of Public Works, the Police Department and the Department of Homelessness and Supportive Housing when it receives calls about encampments. Homeless activists have critiqued what they describe as its police-heavy response to crises that would be better handled by social workers or mental health professionals.

Under the new plan, all the calls now fielded by the center would be rerouted to the Compassionate Alternative Response Team, Jennifer Friedenbach, executive director of the Coalition on Homelessness, said at Tuesday’s press conference.

“We are predicting and recommending that the Healthy Streets Operations Center will no longer be necessary,” she said.

When asked about the proposal, Jeff Kositsky, manager of the Healthy Streets Operation Center, said, “While I do not understand why someone would be opposed to increased collaboration, I have not reviewed the Compassionate Alternative Response Team proposal and thus cannot comment further.”

Police responded to 65,333 calls related to homelessness in 2019, an average of 179 a day, according to data from the San Francisco Department of Emergency Management.

In addition, police responded to thousands of 311 calls funneled through the Healthy Streets Operations Center, the report said.

In a survey of 95 homeless people conducted for the report, 25% said they spent at least one night incarcerated in the previous 12 months. In 2019, 31% of the inmates in San Francisco’s jails were unhoused at the time of their arrest.

The working group also argued that its approach would be far more cost effective. The police department spends $18.5 million responding to homelessness-related quality-of-life violations each year, according to estimates from the Budget and Legislative Analyst. In contrast, the Compassionate Alternative Response Team drew up an annual budget proposal of $6.8 million. Of that, $2 million is already set aside by the Board of Supervisors. Organizers suggest the remainder be drawn from the police budget.

Even if the funding is secured, launch is a long way out. If the program is implemented as it is written, the Department of Emergency Management would have to create dispatch codes and guidelines, the city would need to put it out to bid, staff would have to be hired and protocols would need to be established.

“I don’t want to underemphasize how much work is going to take to do the systemic change,” Friedenbach said.

But the project has already found support in City Hall.

“Anyone who looks out on our streets right now should be able to say clearly that what we’re doing right now is a failure,” said Haney, who was recently appointed chair of the Board of Supervisors’ Budget and Finance Committee. “It is not working, it is ineffective and it is dangerous. This sort of transformational shift will put us in a much better place.”