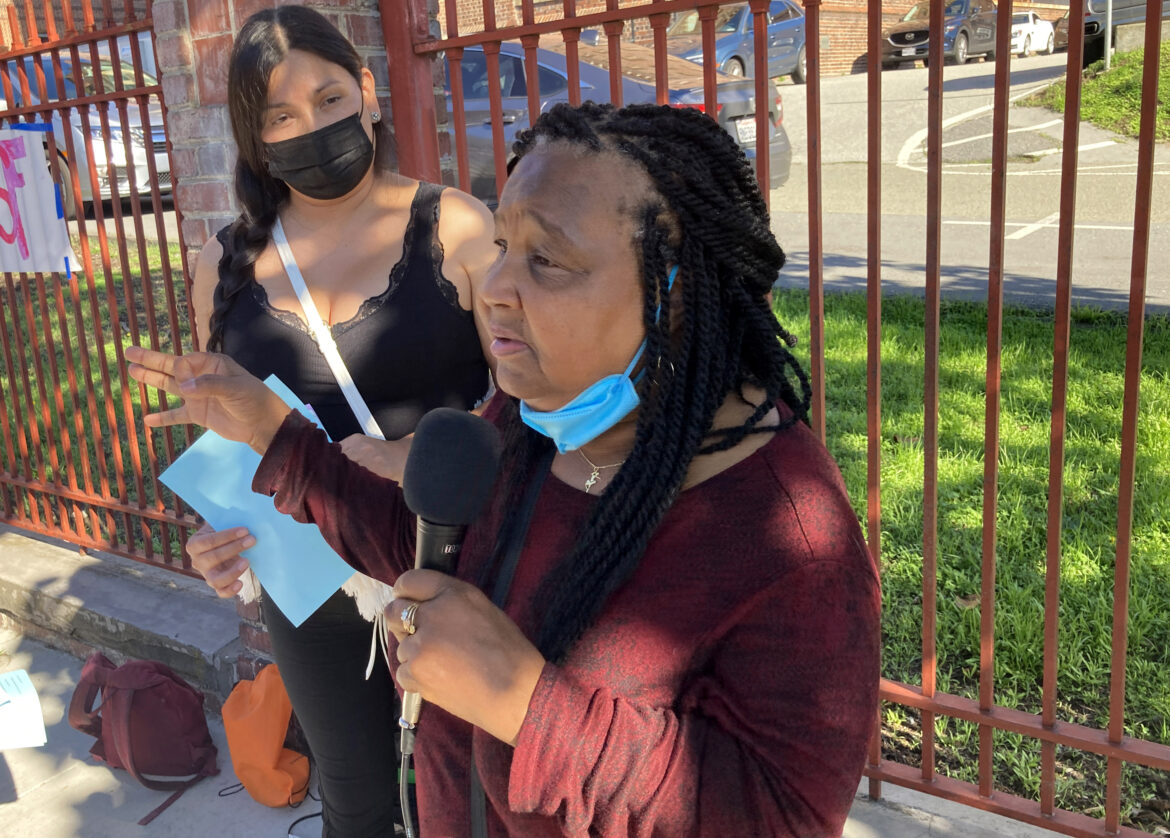 Cheryl Block Shanks said at a Nov. 12 Mad Mob demonstration in front of San Francisco General Hospital that she was placed on nine involuntary psychiatric holds before getting the mental health treatment she needed.

As a judge in Los Angeles was deciding to end pop singer Britney Spears’ conservatorship, a small group of mental health activists staged a demonstration in front of Zuckerberg San Francisco General Hospital.

The demonstrators, part of a group called the Mad Mob, held signs reading “conservatorship is toxic” and “mad pride.” Many said they want the practice of conservatorship — wherein a person who is deemed unable to provide for their own basic needs has decisions about their life and finances made for them — to be abolished. They shared stories at the Nov. 12 gathering about their own experiences with involuntary treatment, which can be a precursor to conservatorship. One such intervention is a 72-hour psychiatric hold, often referred to by its California code section, 5150.

“I was 5150’d about nine times before I really got the help that I needed,” said Cheryl Block Shanks. “They’d strap me down and they’d shoot me up, and I’d wake up in the morning and I would see the therapist for about three minutes. She would evaluate me and tell me — and diagnose me — what kind of medication I needed.”

Block Shanks said she experienced this sequence of psychiatric holds over the course of a few years.

While Spears’ case put conservatorship in the spotlight, advocates said she is not the only one affected.

“We believe that no one should have their rights taken away, and everyone should get the kind of treatment that they want,” said Raia Small, an organizer and educator with Senior and Disability Action, a San Francisco advocacy organization. “The hospital should be a safe place to access care and not a place to fear being restrained, or involuntarily confined.”

It’s unclear how many people are conserved in San Francisco by both the county and private individuals, but the county alone manages the care of more than 600 people. In 2019, San Francisco legislators made efforts to expand conservatorship with the local implementation of a state law. This launched a pilot program called the Housing Conservatorship Program. This was meant to enable the county to make treatment and housing decisions for homeless people with diagnosed mental illness and substance abuse disorders, cycling in and out of jail, psychiatric emergency services and the street.

In order for the county to take over decision-making for an individual under the Housing Conservatorship Program, the person must have a diagnosed mental illness, a diagnosed substance use problem and have been placed on eight involuntary psychiatric holds in a year.

“I think the bar is too high. I think there are more people who are out there who need public health intervention, who need decisions about things like medication and housing made for them,” Mandelman said. “I think it’s a minority of folks who are out in the street. But there are some, and I see that. We all see them.”

Mandelman said families of people with mental illness see a loved one self-destructing and struggle to get that person under conservatorship.

Erik Henriques, director of peer services for the Mental Health Association of San Francisco, also has personal experience with the system. In the 1980s, he was sent to psychiatric facilities in multiple states, and was conserved after being homeless and engaging in self-harm while in San Francisco. Henriques said in an interview last year that in some extreme cases, he sees that conservatorship may be warranted. But for people repeatedly in crisis of the kind the Housing Conservatorship Program is aimed at, conservatorship does not fit, he said.

“There needs to be a more compassionate and thoughtful, educated way to understand the challenges that these individuals are experiencing,” Henriques said. “What it sounds like is they’re essentially just being dragged off the streets, put into a hospital under 5150, assessed, returned to the streets. And the cycle goes on and on and on again, to the point where eventually they just are put into, I’m assuming, a facility. Housed in a facility under conservatorship. And that, to me, that’s just cruel.”

For most people with mental illness who are living unsheltered, he said, offering voluntary treatment and services should be the priority. A program in Marin County that Henriques worked on was focused on building rapport and long-term relationships with mentally ill and homeless people, offering drop-in medical and mental health services, but never coercing them.

“This careful, thoughtful, deliberate ongoing approach to connecting with these individuals is just such a positive thing that I’ve done and been able to do in my life, through my position with the Mental Health Association of San Francisco. And the outcomes often are just incredible,” he said.

Like many intractable problems in San Francisco and California, however, the system of mental health treatment and long-term care is overloaded and under-resourced. Mandelman pointed to shortages in the state hospital system, where severely mentally ill patients are housed in locked facilities and in nursing facilities. He also said that after California began emptying and closing mental health institutions, community-based organizations were supposed to step in to offer alternative care, but that solution never materialized. What’s more, the state sets conservatorship policy but has neither an office of conservatorship nor data about the number of people conserved statewide.

“The whole conversation needs to be completely re-thought out from a more humane perspective. And I don’t have the answers for that,” Henriques said. “All I can say is, based on my personal experience working with this population, that there’s much more proactive and thoughtful ways to address the needs of folks who are struggling and suffering.”