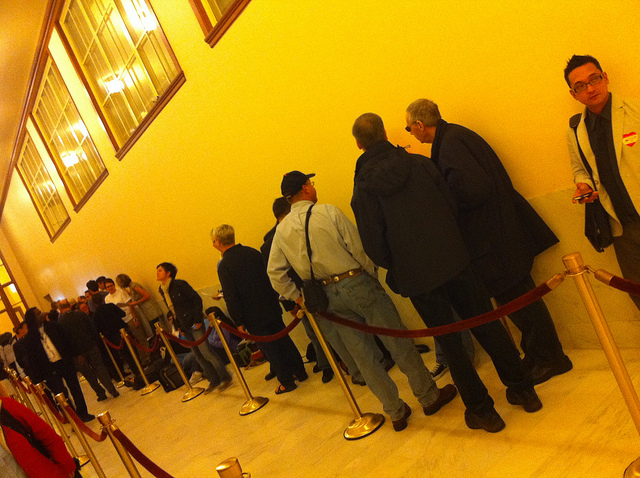 Prospective same-sex spouses lined up in San Francisco City Hall Thursday hoping to get married, but were told they would have to wait until the following week. Photo by

A federal judge ruled Thursday that same-sex couples will be able to marry on Aug. 18 at 5 p.m.

The decision would lift the stay that he placed last week on his own judgement that a statewide ban on gay marriage is an unconstitutional violation of gay Californians’ civil rights.

The ruling could be reversed if opponents of gay marriage appeal the decision to the 9th Circuit U.S. Court of Appeals.

On Thursday morning scores of people gathered on the front steps of San Francisco City Hall to mark the occasion, with some same-sex couples hoping to get married on the spot if the stay were lifted immediately. Also present were also supporters of Proposition 8, the initiative that ended gay marriage in 2008.

Within minutes of the announcement, city officials started handing out paperwork to prospective spouses.

The ruling was supposed to have been announced at noon, but it came 15 minutes late. The pro-gay-marriage crowd, which outnumbered the protesters, cheered loudly upon hearing that weddings might resume within a week.

“We’re finally moving toward equal rights,” said Morgan Abbott, who was there with her partner, Elizabeth Taylor, hoping to witness a resumption of weddings. The couple reacted to the news by kissing and crying.

“I’m so happy!” Taylor said. She added that she did not believe marriage was a religious institution but a civil one. “This is such a huge step in what I think is the right direction.”

Gov. Arnold Schwarzenegger and Attorney General Jerry Brown have both said they would not defend Proposition 8 in court or appeal the ruling by U.S. District Court Judge Vaughn R. Walker.