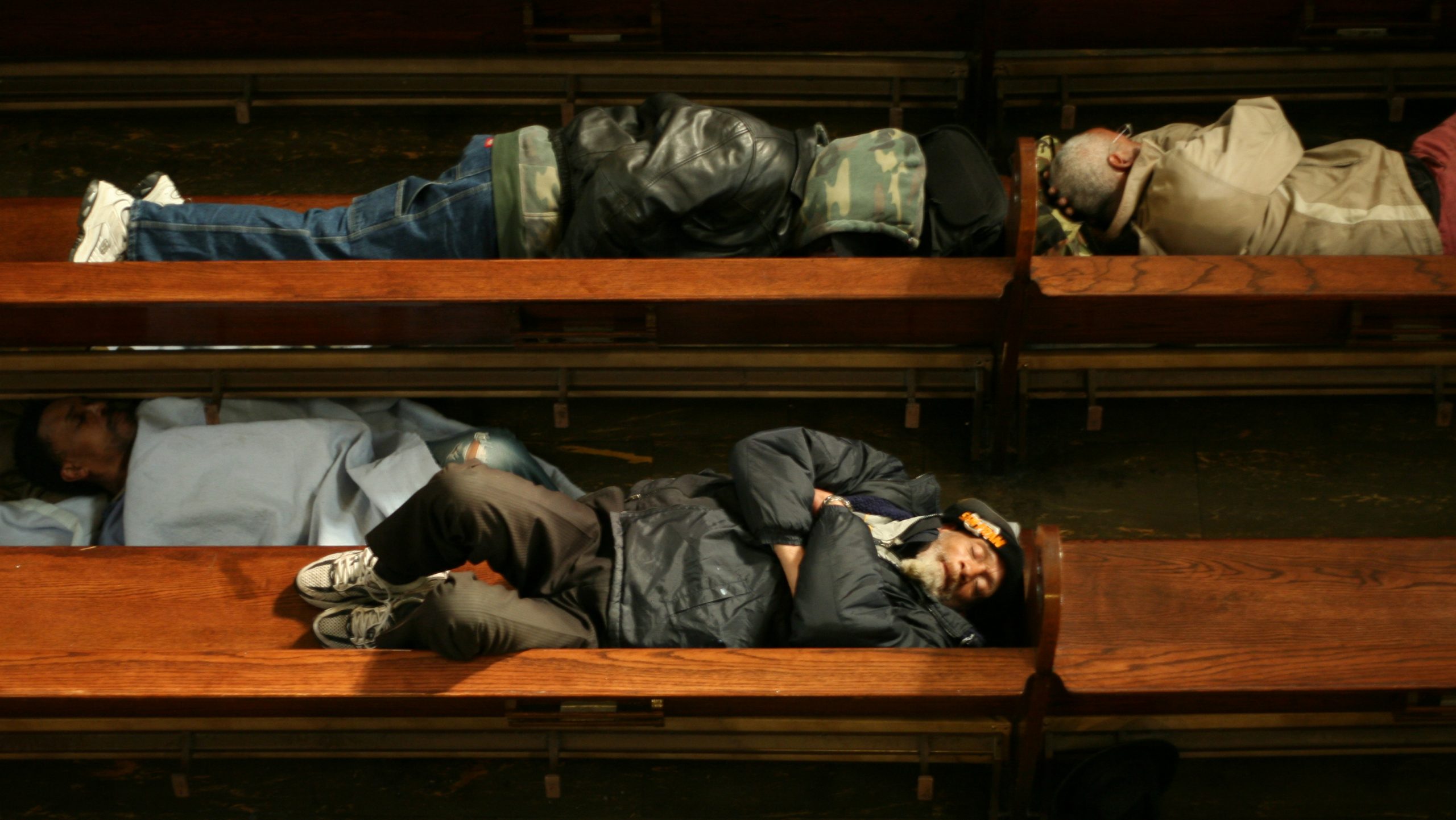 The Gubbio Project at St. Boniface Church in the Tenderloin provides a rare daytime sanctuary for the weary, who gather in the pews to sleep. Photo by Anna Vignet / San Francisco Public Press.

Update 12/9/2014: For more on this topic, listen to KALW-FM’s talk show “Your Call” from Dec. 8, featuring an hour-long conversation with Robert Okin about his new book, “Silent Voices: People with Mental Disorders on the Street.” Okin’s tale relied on two years of first-hand research into the lives of homeless San Franciscans.

Life on the streets is filled with dangers and uncertainties that can have dire consequences for mental health. Studies have shown that homelessness can cause some people to develop disorders or exacerbate existing illnesses in others.

The shelter system, a key element in San Francisco’s strategy for addressing homelessness, is far from a perfect solution. Not only are the shelters difficult for those with mental illness to navigate, the shelter environment could also make their problems worse.

Like many other cities, San Francisco has embraced a “housing first” policy, pulling people off the streets as a first step to address their other physical, behavioral and psychological challenges. But while the capacity of the city’s supportive housing network has doubled in the past decade, there is still not enough room for thousands of eligible people.

Living without housing exposes people to constant stress, said Ellen Bassuk, senior adviser and founder of the National Center on Family Homelessness. They face sleep deprivation, exposure, fears about personal safety, loss of family and friends, the absence of routine and social stigma.

“It’s a horrible way to live, and whatever emotional issues you have are going to be exacerbated,” Bassuk said. “Let’s say you’re a single with diabetes. How are you going to manage that on the street? You can’t.”

Being homeless can cause some people to develop mental and emotional disorders for the first time. A 2011 study examined the mental health of more than 4,000 people before and after they became homeless in Melbourne, Australia. Researchers found that 16 percent of those people developed disorders after they landed on the streets.

In San Francisco, people experiencing homelessness tell a similar tale. One woman living on the streets, Teresa, 53, said she became depressed after losing her job and home three years ago.

She spent sleepless nights wandering from neighborhood to neighborhood to avoid violence, theft and cold. She developed back pain and swollen feet and had trouble taking care of basic necessities like washing her clothes. She felt like a failure.

“You’re just left to the elements,” said Teresa, who did not give her last name for fear that it would hurt her chances to re-enter the workforce. “You don’t feel like you’re part of society. People treat you like a second- or third-class citizen.”

Young people may be especially sensitive to trauma associated with homelessness. The Melbourne study found that 78 percent of those who developed mental illnesses after losing their homes were between the ages of 12 and 24.

Another study, sponsored by the U.S. Department of Health and Human Services in 2005, compared children who had a home with those who did not. It concluded that the homeless children were twice as likely to have learning disabilities or repeat a grade in school, and that 1 in 3 homeless children develops a major mental disorder by age 8.

An estimated 130,000 children in the U.S. live either in homeless shelters or on the streets, according to the federal Department of Housing and Urban Development.

Likewise, a stable permanent home can improve someone’s health. In a 2006 study, researchers compared the rates at which 236 San Francisco residents, who had originally been homeless, sought medical care before and after being placed in supportive housing. After about a year off the streets, the group’s total number of emergency room visits dropped by 56 percent. Emergency room visits rose again for those who lost this housing.

For those toughing it out in the shelter system, daily inconveniences can contribute to chronic stress.

The Coalition on Homelessness, a San Francisco-based advocacy group, criticized the system in a 2007 paper titled “Shelter Shock.” It said the shelters were difficult to navigate, offered an uncomfortable environment and were especially challenging for those with mental illness.

The organization said shelter staff sometimes provoked clients to act out, providing reasons to expel them. The paper also called conditions in some shelters, where people sleep on the floor within a few feet of each other, “intolerable for someone with psychiatric disorder.”

“Shelters are congregate living environments,” said Jennifer Friedenbach, the organization’s executive director. “For many people who suffer from mental illnesses, it’s not an appropriate placement.”

Friedenbach said the report prompted the city to establish higher standards of care. Violations are now supposed to be reported to the city’s Shelter Monitoring Committee.

The city’s biggest innovation is a new 311 telephone reservation system. But shelter conditions have largely remained the same because of lack of funding and poor staff training, said Nicholas Kimura, chair of the committee.

But Teresa, the woman who has been homeless for three years, said shelters were a huge improvement over the street — despite noisy nights, thin blankets and misbehaving neighbors.

Staff did not bother clients, she said, as long as they followed the rules. The biggest problem was the rigid schedule.

The constant back-and-forth made it difficult for her to hunt for a job, and strict rules about late passes (only school, work or religious services are approved) meant she had to skip vital networking events.

“It’s definitely not housing in any shape or form,” Kimura said. “Housing is stable. Housing is safe. Things don’t get stolen in housing. Unfortunately, the shelter system is a different story.”

Evelyn Wang attends Northwestern University, where she studies journalism and legal studies. In 2013, she was named California Journalist of the Year and a National Runner-up by the Journalism Education Association. She also covers issues surrounding Chicago youth for the Chicago Bureau.