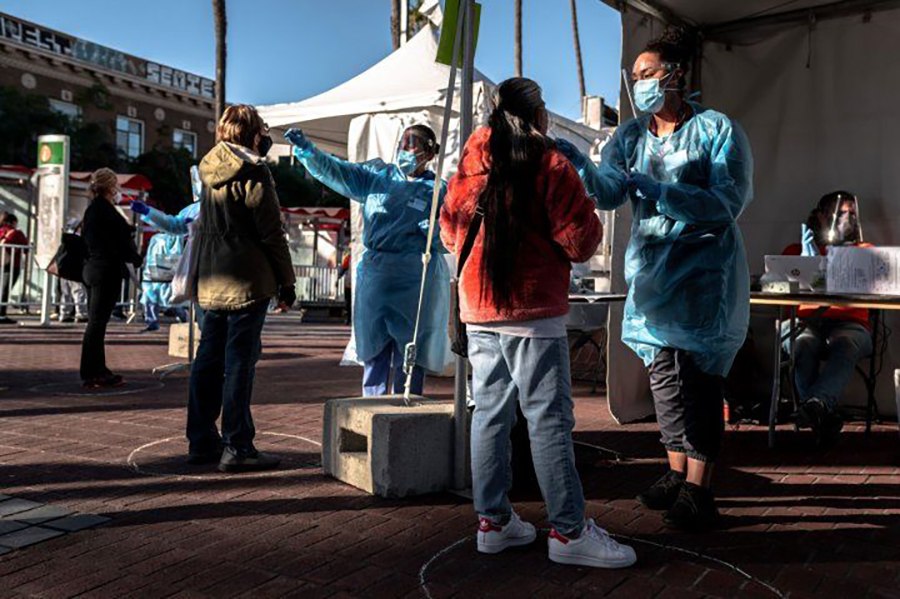 Residents are swabbed at a test site in front of 24th Street BART station in early December. The testing was part of a series of initiatives by Unidos en Salud — a partnership between UCSF and the Latino Task Force for COVID-19.

Looking back on a year of responding to the coronavirus pandemic, Dr. Kim Rhoads and Dr. Carina Marquez named two key components to improving public health, now and in a post-pandemic future: Prevention and community engagement. Rhoads and Marquez, who have been helped establish neighborhood testing and vaccination centers, reflected on a year of pandemic response with “Civic.”

Both have been working closely with community groups like the Latino Task Force, Unidos en Salud and Umoja Health to establish neighborhood testing and vaccination facilities.

Those initiatives, Rhoads said, “are examples of what should be held up as what community can do when community comes together — rather than, you know, some university-based effort that is saving the poor Black and brown people, this is the community saving the community.”

Rhoads, who is associate professor of epidemiology and biostatistics at the University of California, San Francisco and also directs the Office of Community Engagement at the university’s cancer center, said community organizations are crucial resources for public health initiatives.

“We don’t often acknowledge those assets,” she said. “We look at community, we talk about inequity. And so we look at a lack of this and a lack of that, and we fail to see the assets.”

Marquez, an assistant professor of medicine and the associate director for equity in the UCSF Center for AIDS Research, stressed that in these collaborations, community groups were part of the decision making process.

“I think a lot of people don’t understand truly what it means to have true co-design, co-leadership, co-implementation of these projects,” Marquez said. “I think that sometimes people try to think about, ‘oh, we have some community engagement, we’re going to set up this vaccine site, and then we’ll just chat with the community to have them mobilize their people.’ And that is not what we’re doing.”

As the pandemic hit, community organizers and doctors like Marquez and Rhoads moved quickly to build partnerships and get sites up and running, often too quickly to wait for public health department resources. But now, Rhoads said, Umoja Health and Unidos En Salud are the only community-led, non-clinic initiatives in the Bay Area to receive vaccine allocations from the state.

“So to have the county feel enough of a level of trust and understanding that we’re able to reach people that they are not reaching — that they, of course, would want to reach but are not able to reach effectively — says a lot about these collaborations,” Rhoads said.

From early on, the coronavirus pandemic has laid bare stark health inequities through infection and death rates. Testing access quickly became a concern, and now, so has vaccine access: State health department data indicate that Black and Latino Californians are under-represented among those getting vaccinated. In one study in the Mission in spring of 2020, 95% of those who tested positive, but only 44% of those tested overall, were Latino. The majority made less than $50,000 a year and were unable to shelter in place at home. That study, Marquez said, gave Unidos en Salud the evidence it needed to advocate for changes like wage replacement for workers without access to unemployment benefits and more testing in those neighborhoods with the highest case numbers.

“I hope that this emphasizes the need for public health interventions to really go to a lot of those root causes and think about some of the social protections, including health care, ensuring sick leave, and a lot of these things that we we need to address to address a lot of the other health disparities that we’re seeing,” Marquez said.

“We are a population that really believes in, you know, pills and invasive procedures that are hard, that hurt and cause harm in the process of getting to health, and we totally undervalue public health and prevention,” she said.