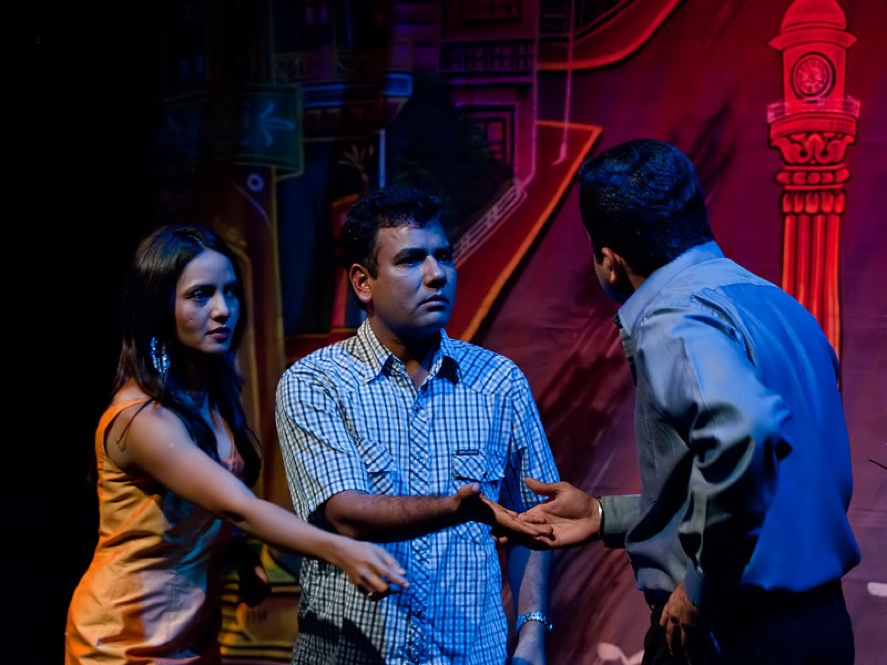 | By Ambika Kandasamy, Research Editor |
LikeTweet EmailPrint More
For the past two years, Devendra Sharma, an assistant professor of communication at California State University, Fresno, has been resuscitating and reinventing a dying Indian folk operatic performance art — Nautanki — in the Bay Area.

The opera, characterized by exuberant singing in Hindi about religious, mythological or sociopolitical-themed stories, is a nightlong communal event performed in outdoor venues in northern Indian villages.

The emergence of media outlets and a lack of fiscal support are swiftly diminishing the popularity of Nautanki in India.

“Nautanki has been affected because it has been given competition — a tough competition — by mass media,” Sharma said. He said that since television is penetrating into Indian villages, people now have other options for entertainment.

He added that there are still hundreds of Nautanki performers in northern India, but their financial hardship is preventing them from popularizing the performance art, especially for the next generation.

Sharma, 39, learned Nautanki at an early age from his father, Ram Dayal Sharma, a prolific Nautanki performer. After moving to California in 2005, he collaborated with local performance artists to produce Nautanki shows in San Francisco, Hayward and Redwood City.

In 2008, Sharma worked with the Indo-American Bay Area theater group Naatak to create a Nautanki called “Sultana Daku” — a legendary tale of an Indian bandit who was popular in the 1920s for his efforts opposing British colonialism. Last year, he produced a Nautanki about immigration and dowry issues called “Mission Suhani” with the help of CounterPULSE, a San Francisco-based arts nonprofit group that supports productions by local artists.

In order to make this traditional Indian art form accessible in a multicultural landscape, Sharma improvised new techniques that can be appreciated by a diverse audience. “I do have to make some adjustments in Nautanki, but I don’t compromise with its soul and its structure,” he said.

Sharma said that he made the entire performance bilingual, with the verses sung in Hindi and English. Unlike the Nautanki performances in India that span the whole night, the shows here are only a few hours long. The shows are performed indoors in a more formal setting instead of the traditional outdoor setting.

In the future, Sharma hopes to bring Nautanki to the big screen. “I’m trying to get funding for a Bollywood movie in which I’m going to depict a story in a Nautanki style so that kids or you know, younger generation get exposed to at least how Nautanki is sung and what beautiful melodies are there in Nautanki.”