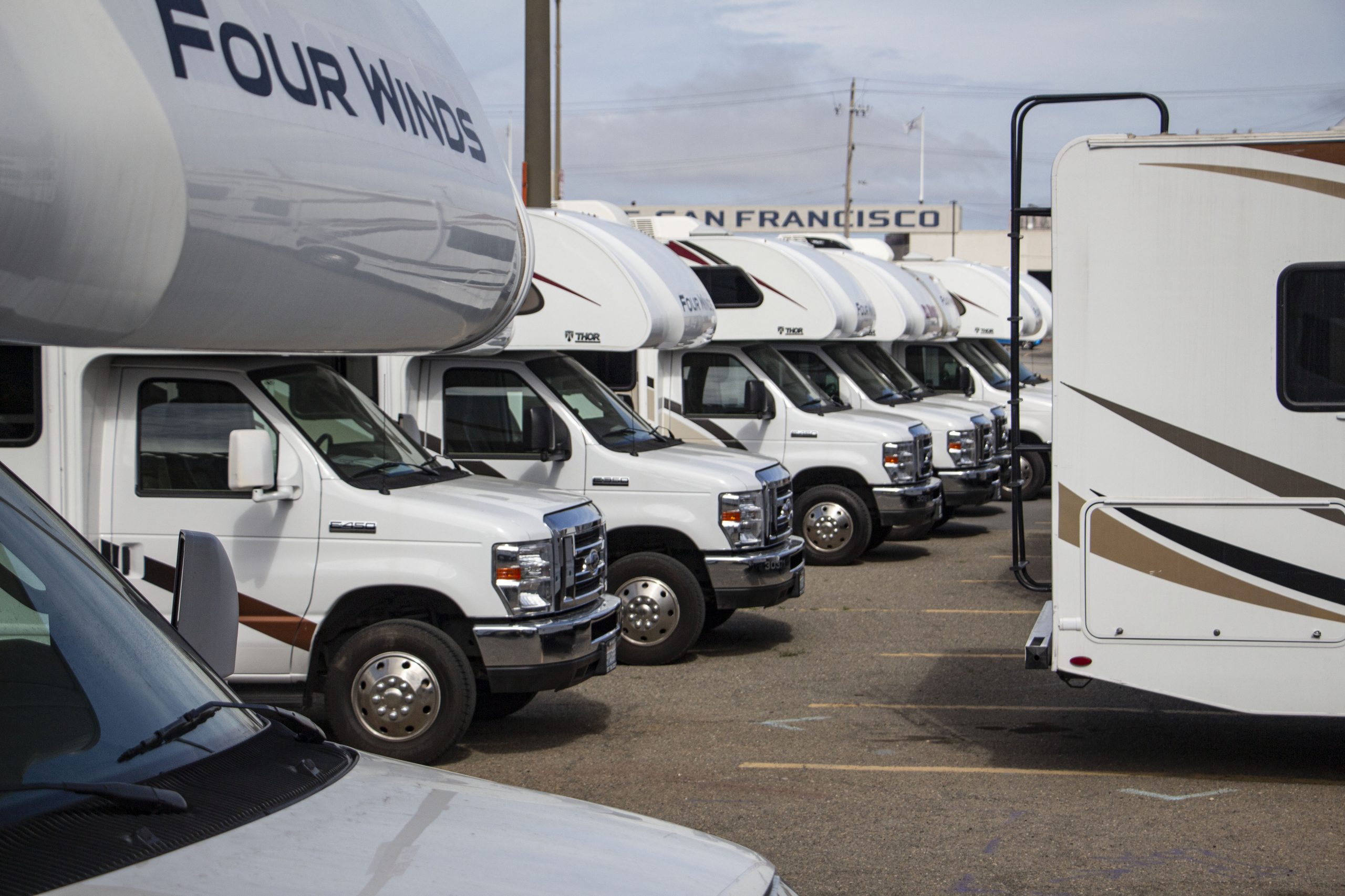 Recreational vehicles that San Francisco officials leased in March to house people who are COVID-19 positive have been sitting empty for more than a month. Brian Howey / San Francisco Public Press

Vulnerable homeless people will finally start moving into recreational vehicles and live-in trailers in mid- to late May as part of a plan to curb the spread of the coronavirus that San Francisco officials announced Friday.

In an email to Randolph Quezada, director of communications for the Port of San Francisco, the Human Services Agency outlined the department’s plan to place unhoused people over age 60 or with underlying health conditions in 29 recreational vehicles leased by the city and 91 live-in trailers provided by the Federal Emergency Management Agency. The vehicles would be stationed near the Bayview.

The process of moving the RVs — which have been sitting empty near Oracle Park for more than a month — and trailers to the site will take about 12 days, human services said in the email. It could take several weeks to deploy site managers, clinicians and security, the agency added.

“At the earliest, the site will be ready to accept guests in mid to late May,” the agency said.

The mobile shelters will be moved to Pier 94 and inhabitants are expected to come from the city’s 10th district, which includes Potrero Hill, Mission Bay and Hunters Point. The district has more vehicles inhabited by homeless people than any other district, according to the January 20th count of tents and lived-in vehicles conducted by the city.

Three city agencies – human services, the Department of Homelessness and Supportive Housing and the Department of Public Health – will manage the site, deliver meals and provide medical and pet care for residents, the agency said. The police department and an as-yet-unannounced private security company will provide security “round the clock.”

“We are also working to engage District 10 community organizations to provide employment opportunities for temporary shelter operations and local food vendors to source meals for shelter guests and staff,” the agency said in the email.

“We are still finalizing negotiations with the port for use of the site,” said Chandra Johnson, a spokeswoman for the Human Services Agency. “We feel it’s important that waterfront stakeholders know about the intentions and communications now.”

The Port Commission, a city-appointed board that oversees port operations, will vote on a memorandum of understanding from the city that details the proposal April 28, Quezada said in an email.

How the RV plan has changed

Officials from the human services and the homeless agencies originally planned to move vulnerable unhoused people experiencing mental health complications into the trailers. Instead, site residents will be placed based on health department recommendations, Johnson said.

“Given that this site will not open for a few weeks and the situation remains fluid, the target population for this operation may change,” the agency said. People being housed in the RVs and trailers, which have already begun to arrive at the new site, will be tested for COVID-19 if they show symptoms, Johnson said. Those in pre-existing relationships will be allowed to share units, she said.

Jennifer Friedenbach, the director of the Coalition on Homelessness, was critical of the city’s lack of action when it was discovered the RVs had been left sitting empty for nearly a month. But her tone changed upon hearing of the proposal. “We’re thrilled,” Friedenbach said of the plan for the RVs. “We don’t want them just sitting around, we want them used, and that’s fantastic news.”

She expressed concern for the city’s plan to employ police and security teams for heavy patrols. She called that aspect of the proposal “classist.”

“This obsession with security is a waste of money,” she said. “Just because you have poor people doesn’t mean you need a bunch of guns around them.”

“The temporary shelter is anticipated to remain in operation throughout the duration of San Francisco’s declared health emergency,” the human services agency said.

As of Friday, city agencies had moved nearly 800 homeless people into hotel rooms to mitigate the spread of the coronavirus among shelter populations. Some members of the Board of Supervisors have pushed to accelerate the pace of hotel placements.

“We are very focused on moving people who are unsheltered into safe spaces,” said homeless department director Abigail Stewart-Kahn about the city’s efforts to move the homeless into hotels and other makeshift shelters at a Friday press conference. “We are continually evaluating safe sleeping sites across the city.”