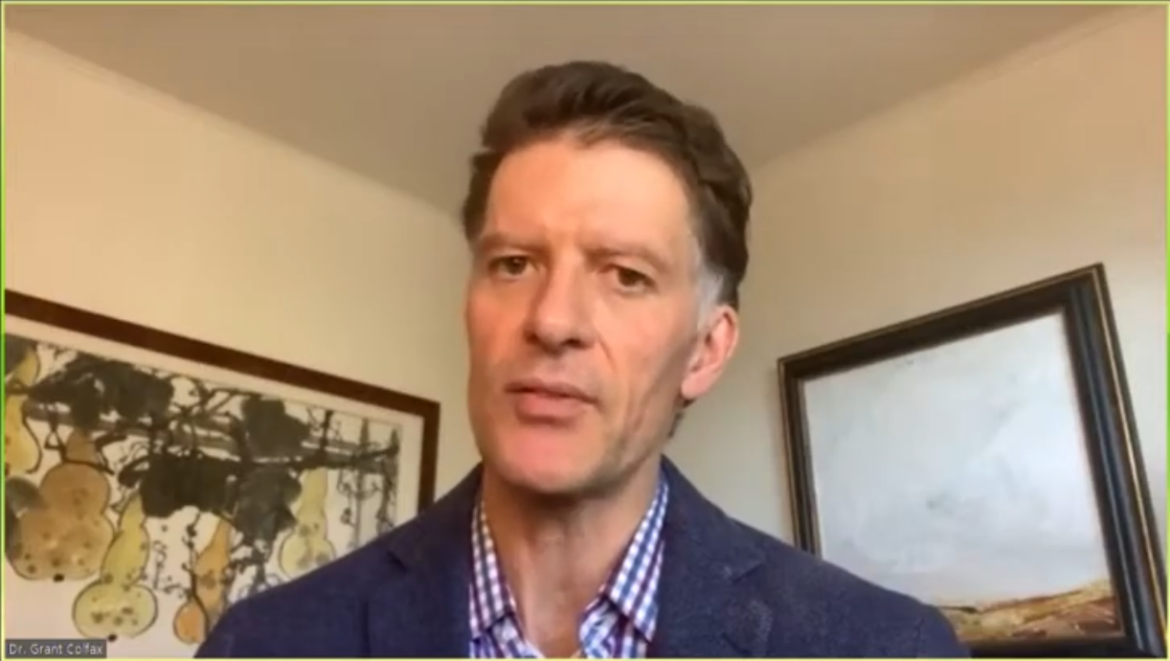 Dr. Grant Colfax admonished residents to stay at home and offered a brief update about vaccine rollout in San Francisco on Monday.

Update: Late Monday afternoon the Department of Emergency Management’s Joint Information Center sent an email to reporters apologizing for cutting off the press conference and said it had done so “due to procedural errors.

As San Francisco receives doses of a vaccine against COVID-19, residents must continue to take precautions against transmission as a surge in infections continues, the director of the Department of Public Health at a Monday press briefing in which most journalists’ questions were left unanswered.

Two thousand doses arrived at San Francisco General Hospital in the morning, while new cases in San Francisco had surged by 50% after Thanksgiving, said the public health director, Dr. Grant Colfax. The city had an estimated 2,897 active diagnosed cases and less than 17% capacity for new cases in intensive care unit beds.

“I think it’s important to step back and realize how dire our situation is,” Colfax said. “Let’s give thanks for the lifesaving vaccine that is on the way. But I cannot emphasize enough, we still must remain vigilant, because the hope of this vaccine will not crush this curve.”

Colfax cautioned that residents should not gather with anyone outside of their households, and stay home for the holidays.

Reporters’ questions at the video-only press conference seeking details about the announcement and information about the region’s strict stay-at-home order were, for the most part, not answered. The Department of Emergency Management, which hosted the event, requires that reporters keep their videos and microphones off and that they submit questions by text in the meeting platform’s chat function.

“Please take the time to submit your question(s) clearly, and include your name and outlet. Unidentified questions will not be taken,” an unidentified staff member wrote. Nearly all of the reporters whose questions were not taken identified their outlets in their question text.

The only set of questions accepted on Monday were about the vaccine, including who would receive inoculations first. Colfax did not describe who would be prioritized for receiving the 2,000 doses. He did not answer Mercury News reporter Marisa Kendall’s question about whether the city had a plan to vaccinate homeless residents, and when people in encampments and shelter residents and staff could expect to be vaccinated.

Department staff also did not respond to reporters’ other critical questions about the stay-at-home order in effect regionally since Dec. 6.

Noting that parts of the order had changed since its announcement on Dec. 4, Kathy Novak, a reporter with KCBS radio, asked whether Colfax was concerned that the message to residents about the precautions they needed to take might get lost.

“Do you think the average person can keep up with the latest changes?” Novak asked.

“Why do we know so little about where infections are coming from? Isn’t this information that comes from contact tracing,” asked Lydia Chávez, executive editor of Mission Local.

“Has the recent shutdown curbed infections at all?” asked Maura Dolan from the Los Angeles Times. “Are medical providers becoming more stringent in admitting COVID patients because of capacity concerns?”

After Colfax responded to just one written question, department staff announced the end of the press conference, leaving the call full of muted reporters awkwardly silent. After a reporter asked why staff were ignoring all these questions, the meeting was ended.