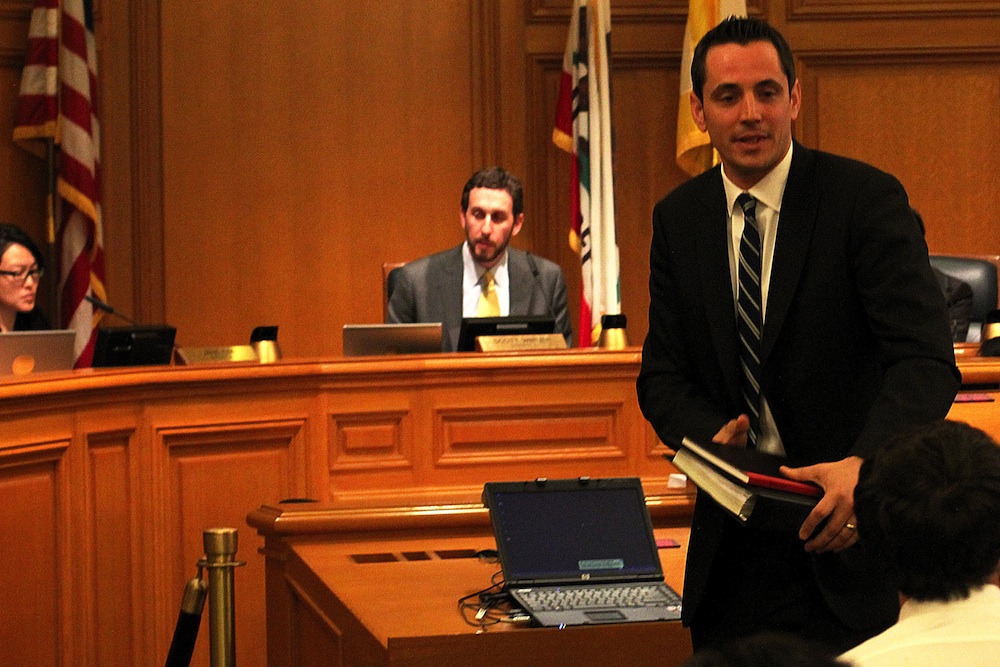 Building owners could pass through the cost of the retrofits to tenants in the form of monthly rent increases. Tenants’ only recourse would be to successfully declare financial hardship.

Sara Shortt, executive director of the Housing Rights Committee of San Francisco, said the process to establish hardship is onerous and difficult, and that tenants should not pay for work that benefits property owners.

The proposed law would change the building code to require the retrofits of San Francisco’s estimated 3,000 “soft-story” apartment buildings, whose weak first floors are vulnerable to collapse in a major earthquake. All those buildings are rent-controlled because they were built before 1978, and they house one in 14 city residents. Over the last decade, such proposals have stumbled over the question of how to pay for the retrofits, the cheapest of which could cost more than $50,000 for a single building.

Though building owners would initially pick up the tab, the San Francisco Rent Ordinance currently allows them to pass through 100 percent of the retrofit costs to tenants by raising rent slowly over 20 years, on top of the maximum allowable increase each year.

When the new law got its first public hearing at a meeting of the Land Use and Economic Development Committee on Monday, public comments centered on how it would hit low-income renters in their pocketbooks.

The retrofits “should not be done at the cost of tenants,” said Maria Zamudio, organizer for tenant-rights group Causa Justa.

“We do want to support this,” Shortt said, but “at $80 to $100 rent increase per month, I’m worried that will cause displacement.”

Actually, the pass-throughs would vary widely from unit to unit, depending on the cost of the retrofit and the tenant’s current monthly rent, according to an economic impact report from the city Controller’s Office.

Building owners who buy the cheapest retrofit scheme could use pass-throughs to raise monthly rents by $38 to $55 per month on rental units that cost $1,407 — the city’s 2011 median gross rent. Under the most expensive retrofit scheme for an apartment of the same price, rents could go up $63 to $83 per month.

Zamudio said these rent increases would speed up displacement in some areas of the city, such as the Mission District, where tenants have left for cheaper rents in other neighborhoods, such as the Bayview or the Excelsior.

“The Mission stopped being affordable about 10 to 15 years ago” because of the housing boom, she said. To this day, the cost to rent in the area continues to get “bigger every year, just because the base rent is larger.”

“Most are paying between 50 and 70 percent of their income for rent already,” Zamudio said. “They have very little at the end of the month, which they spend on things like food and education. It’s really just survival, a lot of the time.”

Tenants who can’t afford the rent increases can avoid paying them by proving their hardship to the city’s Rent Board. But Zamudio said the process was “outdated” for her clients, who lacked the documents required to prove the need for leniency.

“A lot of clients get paid in cash, they pay rent in cash, and they’re recent immigrants who don’t have a long history in this country,” she said. That means they often do not possess pay stubs, rental receipts, income tax info or rebates, receipts from medical expenses, monthly food budgets or bank statements. “How then do they prove that they should have hardship?”

But Delene Wolf, executive director of the Rent Board, said hardship applicants would be taken at their word, without documents, because the process includes a statement under oath before a judge. However, applicants should not arrive completely empty-handed.

“I need to see something,” even if it is just a statement from an employer, Delene said.

But Shortt opposes the pass-throughs on principle: “It’s about equity and fairness. Why on Earth should the tenants have to pay 100 percent of the cost of this improvement that’s going to benefit the landlords 100 percent? Their property values will increase, they’re protecting their property and they can write it off on their taxes.”

Zamudio and Shortt agreed that the retrofits were necessary, and both predicted that the law would not pass if it required property owners to cover all costs.

At the meeting Monday, both women asked lawmakers to put a ceiling on pass-throughs, so that tenants and building owners would share the cost burden 50-50.

But Wolf said that if the even split does make it into the legislation, “that’s going to get really weird and sticky.”

That is because owners of smaller buildings, of five or fewer apartments, have been eligible for 100 percent pass-throughs, as long as they did the upgrades voluntarily. A 50-50 cost share, when the retrofits become mandatory, would mean that owners who wait to retrofit would have to pick up more of the tab than if they had not waited for a law to force their hand.

The Land Use and Economic Development Committee will consider the proposal again on March 25 and decide whether to put it before the Board of Supervisors for a vote.