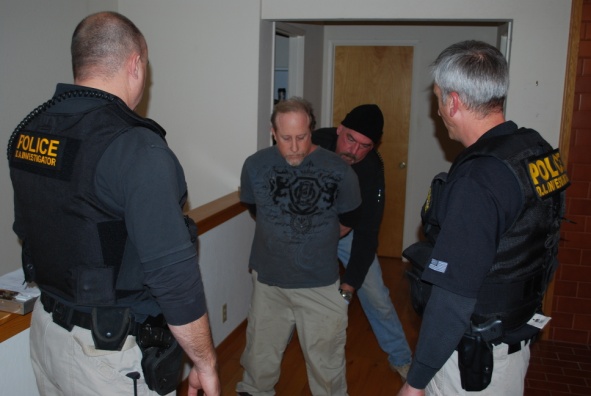 In January, Brian Gross of Spring Valley was one of 10 contractors arrested in an undercover sting operation in Pine Grove (Amador County) and charged with contracting without a license and illegal advertising. He was also changed with violation of probation for a previous work-related felony. Photo courtesy of the Contractors State License Board.

The agency overseeing companies that build houses and office buildings across California has for years trumpeted its ability to sniff out phony contractors, often publishing photos of dramatic undercover police stings of unlicensed builders at work on half-finished suburban cul-de-sacs.

But now the agency, the Contractors State License Board, is looking into a problem of the state’s own making — a program that allows contractors to essentially lease out their licenses.

The board has allowed some licensed contractors to earn extra income by supervising as many as three projects across the state. In some cases, licensees would have to travel hundreds of miles to oversee work performed by others, which experts in the field say could pose liability problems.

The agency said it has no way to search records that might reveal whether convicted felons are using the program as a loophole to work as contractors legally. Alerted by a reporter to one case in which this could be happening, investigators say they are looking into possible improprieties.

The idea of the “responsible managing officer” program was to provide a bridge to licensure for those just starting their businesses. But stories of improper use of licenses worry industry representatives. One of the state’s largest companies that trains licensed contractors is asking the board to monitor its own graduates.

The market for leased licenses is “an industry we don’t regulate,” said Venus Stromberg, a spokeswoman for the state licensing board. “It’s a complicated and convoluted issue, and that’s what we’re struggling with. Does it rise to the level of consumer harm and is it worth addressing? That’s what we’re going to determine.”

Stromberg said in early February that the agency would hire programmers to restructure its databases to allow investigators to look for inappropriately licensed contractors.

“The board is taking a look at this to make sure people are legitimate, and are legitimately acting in the capacity they say they are,” said contracting industry expert David Kalb, president of Capitol Services, a licensing consulting firm in Sacramento.

That’s part of the problem, said David Fogt, chief of enforcement with the licensing board. He said his office investigates cases to determine if the licensed officers, or “qualifiers,” are actually participating in a job. “If we find the qualifier is not actively involved, we allege there’s a violation.”

Industry trainers worry that abuse of state licenses could make it harder for the state to claim the license actually means something. And it could also deprive them of business if more contractors use the backdoor method that does not require a test.

“With three licenses, who’s going to be responsible if there’s failure on the field?” said Gary Fiehmann, the founder of Industry Schools, which says its staff have trained more than 100,000 would-be California contractors over more than three decades. “Somebody has to be the liable person.”

Ultimately, he said, the rules are in place to protect consumers: If things go wrong with contractors, the state board has a system in place to clear up any problems between homeowners and contractors.

Another problem, he said, is on-site safety monitoring. While the responsible managing officer is on location at one job, who is responsible for work at another location at the other end of the state? “That’s dangerous,” he said.

Now the state is investigating whether the responsible managing officer program has been used irresponsibly to sanction work on jobs that are so spread out that they are hard for one person to monitor regularly.

While he was the responsible managing officer for ABS Construction, he was fired for being an absentee license holder, said the company’s president, Amos Ben Shmuel.

“He was here from February 2007 until November 2007,” Shmuel said. A responsible managing officer “is supposed to help, but he was never around.”

Hayhurst is now the qualifier for three businesses in California: Roofing USA in Los Angeles, Oceans Builders Seven Inc., and World Exteriors Inc., in Livermore, according to state records.

Stromberg, the licensing board spokeswoman, said she thought that being a responsible managing officer for a business in Southern California and Northern California would present a problem.

“Perhaps if the two businesses were in Los Angeles, if they weren’t far apart, that would be feasible,” she said. “But if he was in Livermore — where is he physically?”

Hayhurst is not listed on the company’s phone directory. He did not return a request for comment over email.

The accusation of absentee licensing by ABS Construction sparked the licensing board’s interest in Hayhurst.

World Exteriors founder John Arbuckle was convicted in court in 2011 for lying about his roofing experience. The company’s president, George A. Coelho, pleaded guilty last year to embezzling $150,000 from his previous employer,  Pinnacle Roofing Company in Tracy, where Arbuckle had also worked.

Arbuckle was removed from his position with World Exteriors at an administrative hearing in Sacramento in June 2011. After his embezzlement plea in Manteca Superior Court in San Joaquin County, Coelho removed himself as president and CEO in June 2011, Stromberg said.

Now, both men are permitted to be only employees at the company they used to run. Their sons have taken over the business. Coelho is serving a year in home detention.

The state decided to investigate when a reporter asked questions about Coelho’s licensing status in the wake of the  conviction.

Coelho and Arbuckle did not respond to emails or to messages left for them on company voice mail at their listed phone numbers.

Listing a recent felon as the president of a licensed company is a violation of the licensing board’s rules that bars Coelho from holding a contractor’s license for seven years after a conviction.

“That’s part of our investigation,” Stromberg said. “Taken into context altogether, we’ll see if there’s cause to discipline the licensee or him for running the business without a license.”

Fiehmann said it’s not uncommon for ex-convicts who are having a difficult time getting a job sometimes to find a way into the construction industry on someone else’s license.

Fingerprinting of licensees has “been on the books since 2005,” Stromberg said. “Before that, we didn’t do background checks.” That presents the possibility that someone with a felony conviction could qualify “if they could show journeymen experience, had the $2,500 operating capital and pass the exam.”

The far bigger problem of felons in the industry is unlicensed contractors, Stromberg said.

Consumers who might think they are saving money could be employing a felon.

Strombert said that, on average, in one of every third or fourth operation they do, one of the suspects is a sex offender.

“Every operation nets at least half-dozen suspects; you’re looking at one in 18 to 36 suspects, and it’s an average. You don’t know who’s showing up if they don’t have a license,” she said.

Just how many state-registered sex offenders are working in the construction trade is unknown, she added. The board has no authority over sex offenders. Enforcement is up to the local police, the sheriff and the Department of Justice.

“We are charged with enforcing the business and profession’s code,” Stromberg said. “We can’t cite someone because they hired a sex offender.”

The monitoring of the licensing database will take a while to get going because the agency is still developing a protocol.

The hang-up right now is building computer programs that can find repeated licenses and records in other databases that flag felons — “the technical stuff.”

“We don’t know how complicated the program will be,” she said. “So it could be six months from now.”