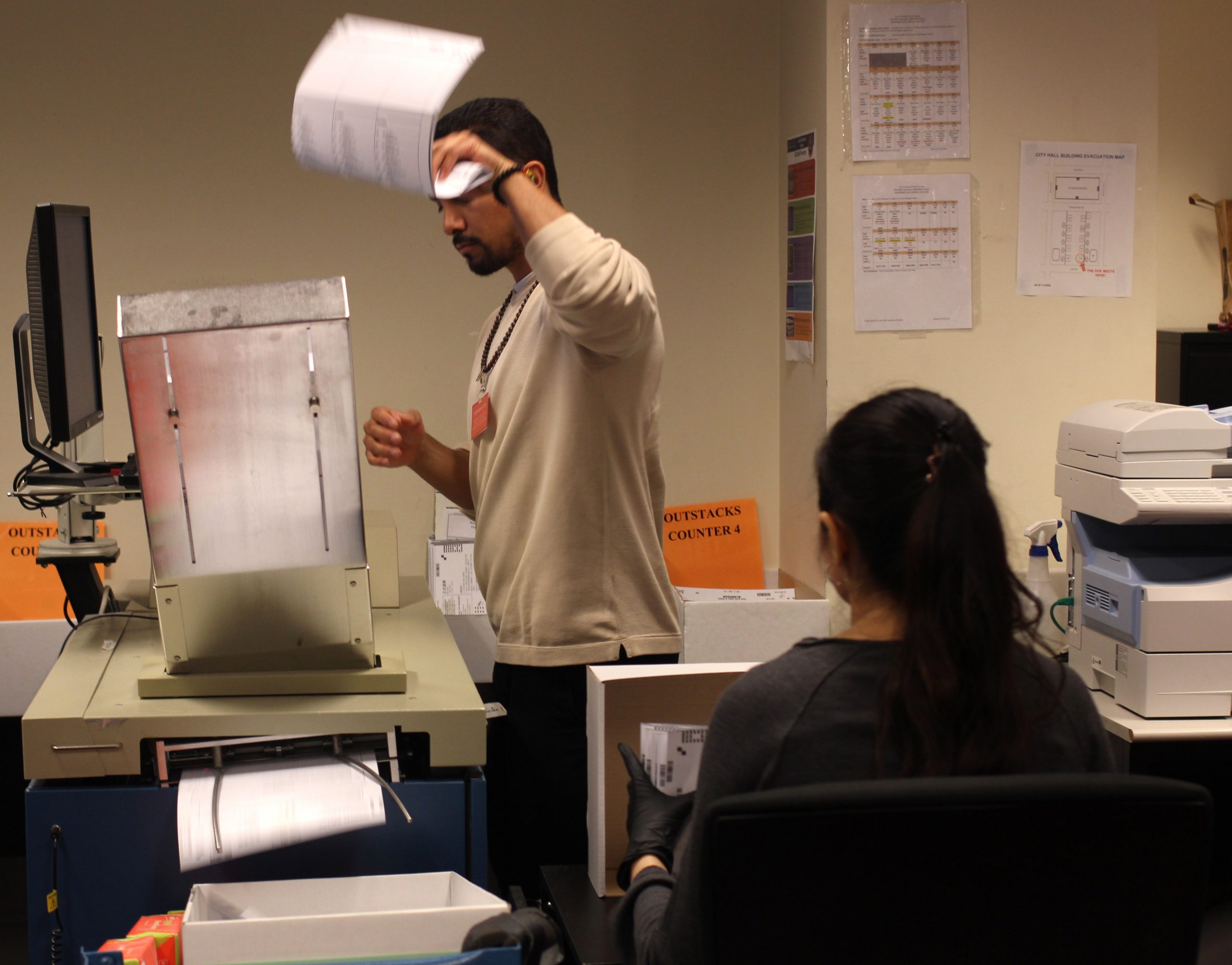 Ballots are still being counted at the Department of Elections. Photo by Noah Arroyo / San Francisco Public Press

It’s all over except for the counting — and that’s still going on.

With San Franciscans still very much focused on President-elect Trump as Thanksgiving approaches, city officials continue to feverishly tabulate tens of thousands of ballots from the Nov. 8 election.

Any results reported so far are unofficial. Several propositions and races for three supervisor seats remain tight, and the outstanding ballots could possibly tip certain contests.

Elections chief John Arntz said Friday he hopes to be done counting the remaining mail-in and provisional ballots next week.

“We’d like to get done before Thanksgiving,” he said.

Tabulating machines could not process the latter because they were faxed or contained imperfections, such as when voters used white-out to correct their mistakes. Now those ballots must be duplicated by hand on behalf of those voters before they can be counted.

How long will that take? “Oh, days,” Arntz said.

Eleven days after people went to the polls, ballots continued to trickle in through the mail, though anything postmarked after Election Day will not be counted.

But that is par for the course for San Francisco voters, who have a habit of sending ballots in long after elections conclude.

“We will probably be getting them in the mail for the next three years,” Arntz said, not in jest.

He would not speculate about the outcomes of any of the races. “We don’t make projections,” he said, “we just count the votes.”

Four propositions that would undercut the powers of the mayor’s office — including Proposition D on filling vacancies on the Board of Supervisors — are all leaning toward defeat.

And now that Supervisor Scott Wiener has an insurmountable lead over Supervisor Jane Kim for the state senate seat representing San Francisco, Mayor Ed Lee will soon have the opportunity to appoint his replacement.

If the election’s projected outcomes hold true, then Proposition D will fail, allowing Lee’s appointee to serve until the next regular election, in June 2018. With Lee expected to replace Wiener with someone who would be considered liberal but more moderate by city standards, the new board’s political balance would tip from its current more progressive 6-5 majority.

But in many proposition races, the distance between the “yes” and “no” votes has yawned so wide that it appears winners can safely be called. The clearest winner is Proposition T, which would restrict lobbyists’ abilities to donate to candidates for office, and would make it illegal for them to give gifts to any politician. It leads by more than 250,600 votes.

The clearest loser is Proposition P, which would require multiple bidders in city-managed affordable housing projects.

The supervisorial races’ winners are more difficult to project. Only a district’s residents can vote for their supervisor, meaning that a fraction of the city’s untallied votes will pertain to any specific race. At this point the races in districts 1, 5 and 11 are probably too close to call, though Sandra Lee Fewer, London Breed and Ahsha Safai are leading.