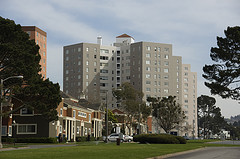 Stellar Management, owners of Parkmerced, plans to develop 200 to 300 units per year for the next 15 to 20 years. Photo courtesy of Parkmercedsf.

For the longer audio story from “Crosscurrents” on KALW News, take a listen: http://kalwnews.org/audio/2010/02/09/environmentalists-and-preservationists-face-parkmerced_141400.html

(Editor’s note: KALW-FM reporter Alison Hawkes took a closer look at Parkmerced, where owners are proposing a 30-year plan to transform the site into a low-carbon community. For developers, it’s a test to see if “green” can stand for both environmental sustainability and the color of money. Hawkes found the drive for a clean new future is clashing with the past. Public Press editor Jon Kawamoto produced this version of the report.)

Parkmerced certainly doesn’t appeal to everyone. It’s out by Lake Merced in just about the foggiest part of San Francisco, far from the city’s cultural centers. But Parkmerced’s owner and developer, Stellar Management, has high ambitions for this place.
“It really is designed to be a place that people from all over the world will say wow, look what’s going on in San Francisco,” said P.J. Johnston, spokesman for Stellar Parkmerced. “It will be a desirable place to live because it will hopefully signal a new way of living in cities.”
Johnston is standing in a new “eco-home” on the 10th floor of one of the 11 towers that rise above the surrounding two-story garden apartments. Stellar renovated the two-bedroom apartment with the latest eco-friendly features. It held a contest in January to award a year of free rent to the greenest family in San Francisco.
The eco-home is part of Stellar’s drive to burnish its eco-credibility.  Stellar is facing an environmental impact review this spring of its multi-billion-dollar renovation plans. Stellar proposes an extension of the M-light rail line into Parkmerced.  It plans to create a new retail strip. There’s also a proposal for wind turbines and a commercial organic farm, and the company plans to nearly triple the number of rental units to 8,900 — but it claims the community will use 40 percent less water and 60 percent less energy.
Reaching those goals means adding 11 new high-rise towers, and current resident Aaron Goodman doesn’t like that idea. Even with expanded transit, Goodman worries the higher density is going to impact the intersection of 19th Avenue and Holloway, one of the busiest intersections in San Francisco.
“Trucks, MUNI trains, and cars circulate through everywhere,” Goodman said. “The transit impacts that occur based on development, the growth that’s being proposed is going to add thousands, tens of thousands of cars to these neighborhoods. And there’s no solid planning for future transit in the western region of San Francisco.”
There’s no doubt that higher density will also change the feel of Parkmerced. Nestled off the busy highways are Parkmerced’s quiet garden apartments. To make way for more people, Stellar wants to demolish the apartments — more than 1,500 units. Places where people like Cathy Lentz has lived for 57 years.
Parkmerced was part of the post-World War II building boom for returning middle-class servicemen and their families. The development brought the suburbs to San Francisco. It was built by Metlife Insurance, which hired famous architects Leonard Schultze and Thomas Church for the project. Schultz and Church designed four pie-shaped lots with radiating street grids. There are expansive lawns broken up by the two-story townhouses that surround intimate courtyards.
Cathy Lentz, who has lived in Parkmerced for 57 years, says it’s a historical slice of America worth keeping.
“This is the beginning of my block, my patio,” Lentz said. “I always think of it like Italy. And it’s sort of an ellipse — you have people on the left and right, you have apartments that are ground floor above and you look into each other’s kitchens. How can you go from something like this to high density?”
Preservationists share Lentz’s sentiments. Parkmerced has been nominated for this year’s 11 most endangered historic places on the National Trust for Historic Preservation.

“Parkmerced was started in 1941, which makes it now 69 years old. And if we were at 1941 and talking about something that was 69-years-old it would have been built in 1872. So would we have really decided in 1941 to tear down buildings that had been built right after the Civil War?”
But some believe the past is getting in the way of the future.
“I don’t see you how you can preserve a community as a time capsule,” said Jeannie Scott, who lives in one of the garden apartments and is a member of Parkmerced’s sustainability committee.
“I turn the shower on — and I just let it run for somewhere around five minutes or so,” Scott said. “Usually when I think of preserving a place it’s maybe a church or a building, but people live here. So that means that as the rest of maybe San Francisco or the rest of California or the rest of the United States moves more towards sustainable or wind power or energy efficient, we’re still stuck here.”
Since New York-based Stellar Management purchased Parkmerced in 2005, It  has made more than $100 million in repairs — even to areas it plans to eventually tear down. The company has also promised to transfer existing tenants to the tower units with their rent control intact.

Critics say it would be more environmentally sound to upgrade existing buildings with eco-friendly features. And the Sierra Club has also withheld support because it believes the project has too much parking.

But Parkmerced spokesman Johnston said upgrading the property is the right way to go.

“If you’re going to become the single largest rental property owner in San Francisco and you have to do a tremendous renovation in the thousands of units, a wise business person looks at that and says ‘I think we’re going to do that to the standards of the 21st century, to the standards that haven’t even been attained elsewhere yet, because this can be a signature place,’” Johnston said.
Pending city approval, Stellar hopes to begin construction of the new high rises in 2011. The company has promised to transfer existing tenants to those units with the rent control intact. But that’s not enough to satisfy all of Parkmerced’s residents.
A group of residents led by Goodman is drafting an alternative redevelopment proposal in which preservation is the vision.