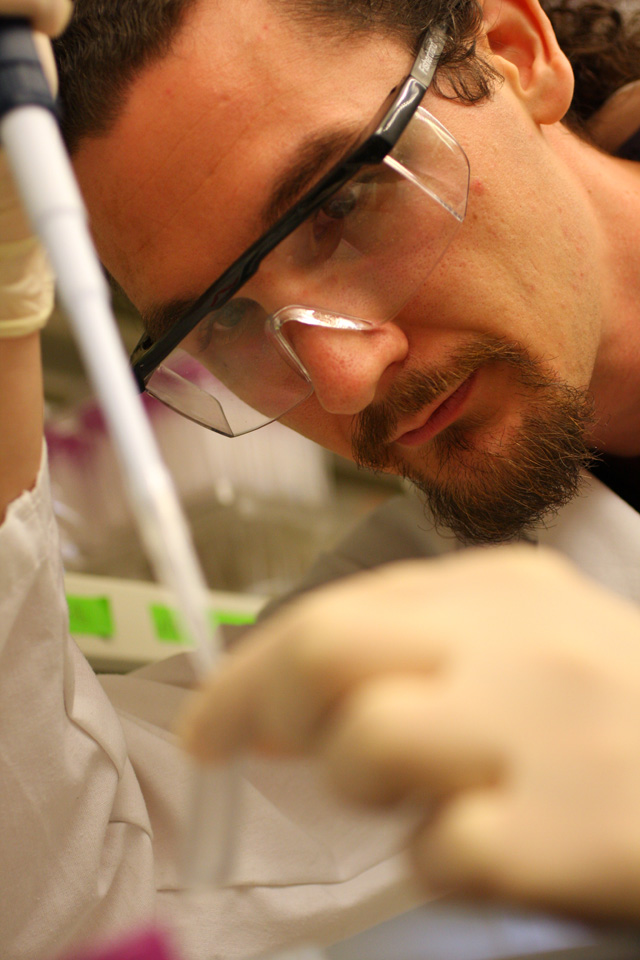 With his ponytail and goatee, Kiel Copeland looks like your average lab geek almost as much as TV’s gleaming “CSI” laboratory resembles one in real life. Then again, he never aimed to be a lab nerd. Misfortune — and luck — brought him to where he is today, after losing his job when his employer went out of business. Now the 27-year-old former printing press operator is a team leader in a San Francisco company on the verge of a breakthrough with its revolutionary anti-viral drugs.

Copeland’s new career path began with Bridge to Biotech, a City College of San Francisco program that helps students without a science background gain laboratory certification. He found out about the program through a flier at an employment office. The idea of going into biotech seemed tempting — but unrealistic for someone not educated in the field.

“Science always seemed to me like something for the intellectual elite, the smartest of the smart,” Copeland said. “I never saw myself as that. It was something that I couldn’t accomplish.”

The City College program was designed to meet a clear workforce demand. Over the years, Bay Area biotechnology companies have said that a dearth of skilled workers could jeopardize the region’s position as a leading biotech hub. A recent report on the state of the biotech industry by two nonprofit organizations and a consulting firm cited “failure to encourage workforce development and growth” as the greatest threat to the future of California’s biomedical industry. Nearly half of the about 100 company CEOs surveyed ranked “an unprepared workforce” among the top three threats.

But in spite of this, many big companies have been hesitant to take Bridge students on as interns. Some will only consider four-year-degree students, not two-year ones, even to fill internships.

Laurence Clement, the program’s internship coordinator, said there is room for these two-year graduates in local biotech firms.

“They do the basic manipulation experiments that people don’t want to do all day,” Clement said. “It’s taking so much money for companies to have four-year-degree students do such work.”

Bridge to Biotech mainly targets minority students without a background in science. It has an impressive track record. Since its launch in 2002, it has reached 609 students, 82 percent of whom make it through the program. Also, 83 percent of that group go on to take more college classes. According to recent numbers from the National Center for Education Statistics, students in less-than-two-year institutions overall graduate only 43.7 percent within the normal program timeframe.

But in the last year, the program has run into financial trouble. The National Science Foundation, followed by a Vocational and Technical Education Act grant, financed the formation of Bridge to Biotech in 2002. In addition, The Bay Area Workforce Funding Collaborative paid for establishing the internship program in 2007.

Now those funds — about $1.2 million over six years — are running out. Bridge to Biotech needs money not just to do the training. It is also expensive to recruit hard-to-reach students, and to find internships at biotech companies that have been more inclined to hire four-year-degree students.

To help solve the money problem, Edie Kaeuper, the coordinator of Bridge to Biotech (and director of the City College biotech programs) has shifted parts of the program into regular City College classes. For example, the twice-yearly Bridge to Biotech networking event is produced by a class called Organizing a Scientific Conference, but that only addresses some of the challenges.

“We are still short of funding to do more outreach to these students because they are a special population and they are hard to get to,” Clement said.

Securing internships for students at local companies has proven to be a hurdle. The internships are an essential part of the program’s placement success because they offer the students a hands-on chance to learn laboratory skills and boost their professional confidence.

BayBio, Northern California’s life science association, with 450 members from pharmaceutical giants to small startups, acknowledges that there are problems.

“Some companies must get over the perception that the community colleges are vocational schools, not serious academic programs,” said Lori Lindburg, BayBio’s director. “Bridge is first rate.”

Amgen is one of the big companies that only hire four-year-degree students. The company, which is based in Thousand Oaks but has research facilities in South San Francisco, recruits qualified interns who have experience and knowledge in key disciplines important to the company. “In many cases, we find that students in four-year undergrad programs best meet the qualifications,” spokeswoman Kristen Davis said in an email.

Luckily for Bridge students, startups are more open to new ideas. One is Copeland’s employer, Prosetta, which is developing anti-viral therapies to fight diseases such as HIV — with the help of Bridge students.

“I wouldn’t trade my team for any other team in the world,” said Vishwanath Lingappa, the founder and CEO of Prosetta, which has hired eight former City College interns as full-time employees. Seven are from Bridge. In addition, Prosetta offers four to seven internships for each Bridge graduating class, a lot for a company with 35 employees.

Lingappa said a large, well-to-do company might not want to take such risks.

“But by not taking the chance, you lose out,” he said. “By taking that chance, we’re the beneficiaries. I would encourage pharma to rethink their approach in lots of ways.”

Despite the local financial problems, Bio-Link, a national biotechnology educational program, has chosen Bridge’s model to be adopted nationwide this year with funding from the National Science Foundation. Four Bay Area colleges are showing interest in implementing the program, and three colleges, in Austin, Texas; St. Louis; and Lawrenceville, Georgia, have signed up.

These schools will get access to the Bridge’s course material and program tools, which have proven efficient in San Francisco. The keys to the program’s success in getting students through the program and internships are hands-on learning, mentoring and building students’ confidence step by step.

“The Bridge kind of tricks you,” Copeland said. He said most Bridge students start out believing they cannot ever get a job in science. “We said OK, we’ll do the beginning stuff and then we’ll fail later. But then we went to the college biology class and understood that we already knew all that.”

Copeland started pursuing his associate’s degree, but he has put that on hold for now, choosing to concentrate on his work at Prosetta. He is not sure if he would go back to school or look for a new job if the company ran out of funding. One thing is for sure: He is now more professionally self-assured.

“I feel confident that I can go out and sell myself to someone somewhere,” he said. Even the thought of doing a Ph.D. someday does not intimidate him.

“There’s nothing more glamorous than finding something that nobody else has found and being the first one to see it,” he said. “Especially when you’re 27 and technically without a college degree.”

Siri Markula is a Finnish journalist working for SF Public Press as part of her Innovation Journalism Fellowship at Stanford University. In Finland she works as a news editor at Helsingin Sanomat, the largest-circulation daily newspaper in Scandinavia.